Flush off of my first crafty victory in a long time, this weekend I decided to temp fate and see if I might be able to have another success.  It all started with Martha.  Stewart Living, that is. I received her latest issue a couple of weeks ago, which featured an article about decorating easter eggs- but of course, not the way that I do them, with the drugstore box of egg dye bought the day before Easter.  No, these are hand painted and decoupaged and I-don’t-know-what-all.  At the same time, Good Housekeeping comes along with some beautiful marbelized and glittery eggs on the cover.  Here’s what I’m talking about:

For some reason, I just couldn’t stop thinking about those eggs.  I really wanted to give them a try.  And, Beau loves projects like this, so I knew he would be into it.  (Which he was, for about 3 minutes until a friend called him to come over).

So, I took these projects straight from these magazines.  Living has all of the projects, with video tutorials, here.  Good Housekeeping has them here. Their tutorials are much better than what I can give you- but I’ll tell you what did and didn’t work for me.

My favorite was hand painting the eggs! I am not an artist, so I thought this part was going to not go well- but surprisingly, it was very easy and fun!  They dried super quick, so they were really easier and less messy to work with than egg dye.  And although I didn’t come close to the cover picture, I’m still pleased with how they turned out:

Kind of looks like an egg is dressing up like a mummy for Halloween, doesn’t it?  Maybe if you had a whole bowl of them, styled up better, it would be a nice effect.  Oh wait, yes it is: 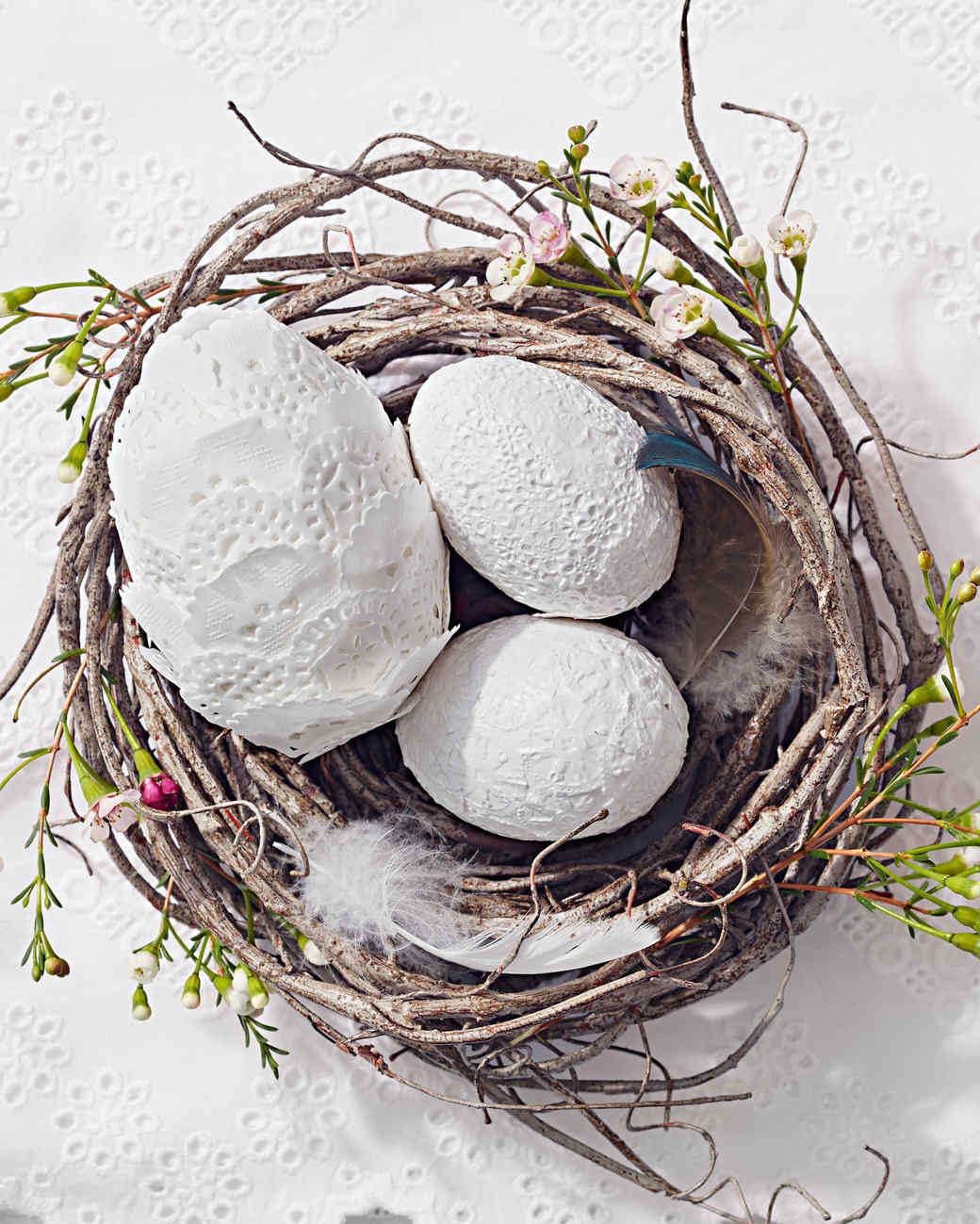 Living also had a project with men’s cut up dress shirts decoupaged to the eggs.  Didn’t have any of those either (who are these people?) but I attempted to recreate this with a gingham ribbon.  Not good.  Just not good.  This was the only part of the project that frustrated me, because I couldn’t get the ribbon to lie down- it just looked like the  poor egg was spouting some growths.  Or limbs.  I realized later that I didn’t get a pic of this.  If you want to create this project, just go to the thrift store and buy a gingham shirt, which is what I should have done in the first place.

The glitter was super fun to work with!  Just Mod Podge, apply glitter, and you have a beautiful egg with hardly any effort:

Oooh, I almost forgot!  That gold spotted egg I made with a gold paint pen from Michael’s.  Super cute.

Okay, the marbleized eggs from Good Housekeeping.  Those aren’t the shaving cream method, but done by putting a couple of drops of fingernail polish into a bowl of lukewarm water, then swirling the egg around in the water.  The directions say warm water- but when I used warm water, this is what happened:

The color clumped together and the eggs wouldn’t color.  So I figured out to use just very lukewarm water and it worked a lot better…although I was never able to get the really cool marbled look that GH had:

Here’s what I ended up with:

I was really surprised at how easy, fun, and relaxing this was!  A huge bonus- it was much less messy than regular Easter egg dye!

So now I’m two for two.  Maybe this blog thing is bringing out my deeply buried crafty genes.  Dare I even put a “Projects” category in my menu?

More from my site

Mom, wife, nurse. Definitely not a professional designer, but I've learned a thing or two (and made plenty of mistakes) about design and DIY as I'm making a home our family loves. Check out my design and DIY galleries for inspiration for your next project! Read More…

Thanks so much for visiting! Please feel free to use up to 3 of the images on this site- just don't alter them or remove the watermarks without my written permission first. Please credit the images back to this site if you use them.

I love when you share and thank you for doing so!

Avenue Laurel is a participant in the Amazon Services LLC Associates Program, an affiliate advertising program designed to provide a means for me to earn fees by linking to Amazon.com and affiliated sites.